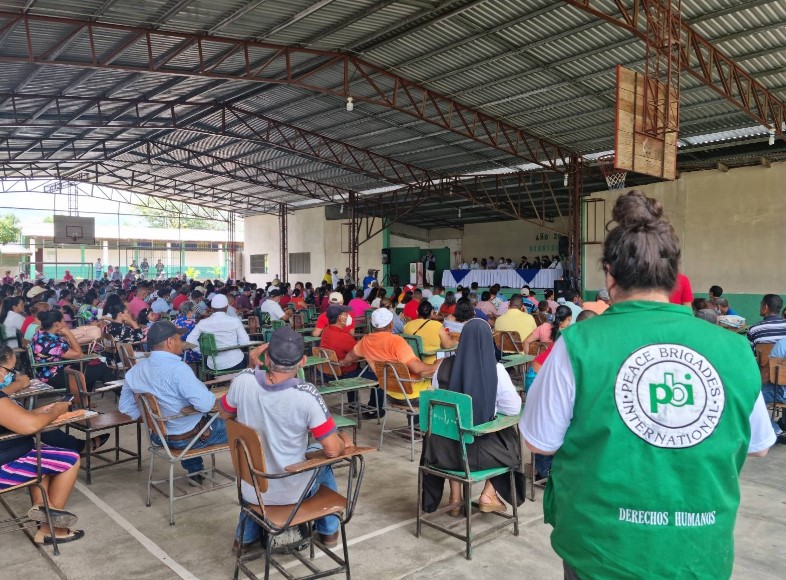 “#PBI accompanies @CEHPRODEC at an open town hall of San Esteban (Olancho) where the municipality declared itself free of open pit mining. We highlight the importance of ensuring effective participation of communities in decision-making that affect their territory. #Human rights.”

Impakter has reported: “According to the Social Forum on Foreign Debt and Development of Honduras, FOSDEH, there are currently 217 mining concessions and reserves in Honduras covering 324,981 acres. In 2020, roughly 130 of these mine sites reside on indigenous land, more than half of all mining concessions in Honduras.”

On February 28, Reuters reported: “Environmental permits for Honduran metal and non-metal mining will be cancelled, the country’s government said in a brief statement on Monday, describing the industry as harmful and declaring it will specifically prohibit open-pit mining.”

A few days later, on March 4, the news service added: “The Honduran government’s recent push to sharply restrict mining will not apply to existing projects, the country’s environment and mining minister said on Friday, days after the ministry declared the industry harmful and pledged to cancel permits.”

Between 1998 and 2005, Canada emerged as the leading investor in mining in Honduras.

In January 2012, Development and Peace reported: “ [CEHPRODEC coordinator Pedro Landa] said that international mining companies, including Canadian ones, have been responsible for environmental pollution, have failed to pay taxes, and many are suspected of having paid bribes to government officials.”

CEHPRODEC mobilized against the General Mining Law that was passed by the Honduran Congress on January 23, 2013.

MiningWatch Canada has explained: “The General Mining Law was developed with technical assistance paid for with Canadian overseas development aid. Its passage in 2013 lifted a seven-year moratorium on any new mining projects.”

It also noted: “This law was developed and passed with strong diplomatic support from the Canadian embassy, and with contributions from the Department of Foreign Affairs and the former Canadian International Development Agency.”