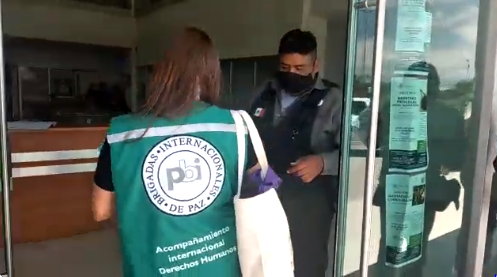 On September 10, Info Quórum tweeted: “A representative of Peace Brigades International Mexico (@PBI_Mexico) entered the audience of the environmentalist and community communicator Miguel López Vega, who was a #PresoPolítico [political prisoner] due to his defence of the Metlapanapa River.”

Adding to that, PBI-Mexico tweeted: “We accompany members of the @fpdtampt [Peoples’ Front in Defence of Land and Water], like the defender Miguel López Vega, because we are concerned about the criminalization that Miguel and the communities and peoples face for their work in defense of water and earth.”

Once Noticias has explained:

“Miguel López Vega has been persecuted since 2019, when he began to denounce the situation of the Metlapanapa River. He was arrested in January 2020 after leaving a meeting with the Puebla Department of the Interior, after delivering a certificate in which his community declared itself free of political parties.

The crimes for which he was charged at that time were ‘opposition to a public work and attacks on the general routes of communication and security in the means of transport’.

At that time, he was denied taking his process free, because the judicial authorities, linked to the government of the entity, argued that he intended to use weapons and explosives during the alleged attacks for which he was accused, during a peaceful protest on October 30, 2019. As a result, he was placed in preventive detention.”

The hearing for López Vega was held on Friday September 10.

Later that day, Angulo 7 reported: “After Friday’s hearing in the case of activist Miguel López Vega, the judge summoned a new one for October 11, where she will review the evidence presented by her defense to determine if she grants the provisional suspension of the criminal process initiated in 2020.”

“[López Vega’s lawyer Juan Carlos Flores Solís] said that the new hearing will be the fifth since January 2020, when he was detained, so he trusts that now they can be granted precautionary measures in his favor.”

That article adds: “It is necessary to remember that López Vega, defender of the Metlapanapa River, was arrested in January of a year ago, after opposing the installation of the storm and sanitary sewer system in the Ciudad Textil Industrial Park in Huejotzingo, a project that could contaminate the tributary.”

PBI-Mexico began accompanying the Peoples’ Front in Defence of Land and Water (@fpdtampt) in early 2020.