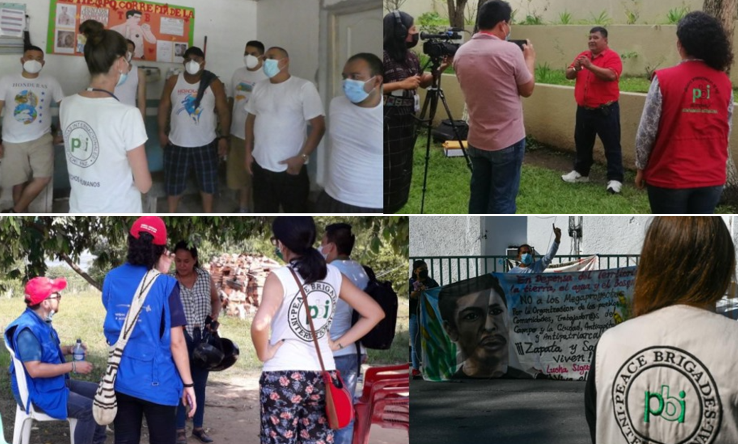 Canada does not have due diligence legislation in place that recognizes and addresses (through enforcement mechanisms and meaningful consequences) the dangers faced by human rights defenders (HRDs) who challenge the impacts of Canadian transnational corporations and investment banks on their communities.

Peace Brigades International (PBI) seeks to inform policy discussions regarding Mandatory Human Rights Due Diligence (MHRDD) to ensure that it is an effective tool to prevent attacks against human rights defenders, promotes respect for human rights and prioritizes human well-being over corporate profits.

1- Safeguards against reprisals. MHRDD should require robust safeguards for HRDs ensuring companies adopt a zero-tolerance approach on reprisals and attacks on defenders not only in their own operations but also when they are linked to such attacks through their value chain, business relationships and private security contractors.

3- Accountability and access to remedy. MHRDD should include effective mechanisms for victims and communities to hold companies to account and access remedy in the context of human rights violations and attacks on human rights defenders. The burden of proof has to be with the company. This legal responsibility must include a duty of care for private security companies employed by them.

4- Inclusion of financial sector. The scope of MHRDD legislation must also cover banks and the wider finance sector whose funding can cause or contribute to human rights violations.

PBI believes MHRDD would mean that:

1- US steel producer Nucor would have been obliged to ensure respect for human rights, including opposing the reprisals and unjust imprisonment of the defenders of the Guapinol River, when it held a stake in the Honduran company Inversiones Pinares and its iron oxide mine that polluted drinking water drawn from that river.

2- Grupo COBRA, a multinational company headquartered in Spain contracted by the Guatemalan company Corporación Multi Inversiones (CMI) to build hydroelectric dams on the Cahabón River, would have been obliged to halt construction when it became evident that those dams lacked free, prior and informed consent and when Maya Q’eqchi’ defender Bernardo Caal Xol was unjustly imprisoned for his opposition to the dams.

3- The French transnational Veolia, that owns a waste landfill site within a marshland ecosystem in Barrancabermeja, Colombia, would be obliged to respond to community allegations it has contributed to the pollution of the marshland through the leeching of toxic and chemical waste into the waterways as well as the assassination attempt against Federation of Santander Fishers for Tourism and the Environment (FEDESPAN) Yuli Andrea Velázquez, a vocal opponent of this pollution.

4- Spain’s Corporate Internationalization Fund (FIEM), that provided funds to the Spanish companies Elecnor and Enagas for the construction and management of different elements of the Morelos Integral Project (PIM) and specifically the gas pipeline associated with this megaproject in Mexico, would have been obliged to freeze its funding if the communities opposed to the PIM could have filed a complaint with FIEM about the threats it has received as well as the murder of Náhuatl defender Samir Flores.

Just a few examples involving Canadian transnationals might include the Fortuna Silver Inc. mine in Oaxaca, Mexico (where Bernardo Vásquez was murdered in reprisal for his opposition to the mine); Radius Gold Inc. establishing the mine in La Puya, Guatemala (without free, prior and informed consent); the CIMA+/ Hydrosys constructed Canjel dam in Honduras (that lacked an access to remedy process when the company claimed the dam was not on Lenca territory); and Parex Resources in Colombia (that has received millions of dollars in financing from Export Development Canada despite concerns about the legality and impact of its Aguas Blancas oil operations on the village of El Diviso in Bajo Simacota).

Instead of support for MHRDD, there are persistent concerns that Canadian embassies prioritize Canadian commercial interests over human rights; Canadian agencies have been involved in the writing of mining laws (notably in Honduras, Guatemala and Colombia) that favour Canadian transnationals; Canadian governments have focused on “free trade” agreements that entrench investor rights; that remedy processes, including the new Canadian Ombudsperson for Responsible Enterprise (CORE), is limited and lacks the necessary investigative powers; and that Canada has opposed related rights-based conventions including the Binding Treaty on transnational corporations and human rights.

PBI-Canada continues to follow this issue and to advocate for both MHRDD and a Binding Treaty along with systemic changes to Canadian foreign policy.