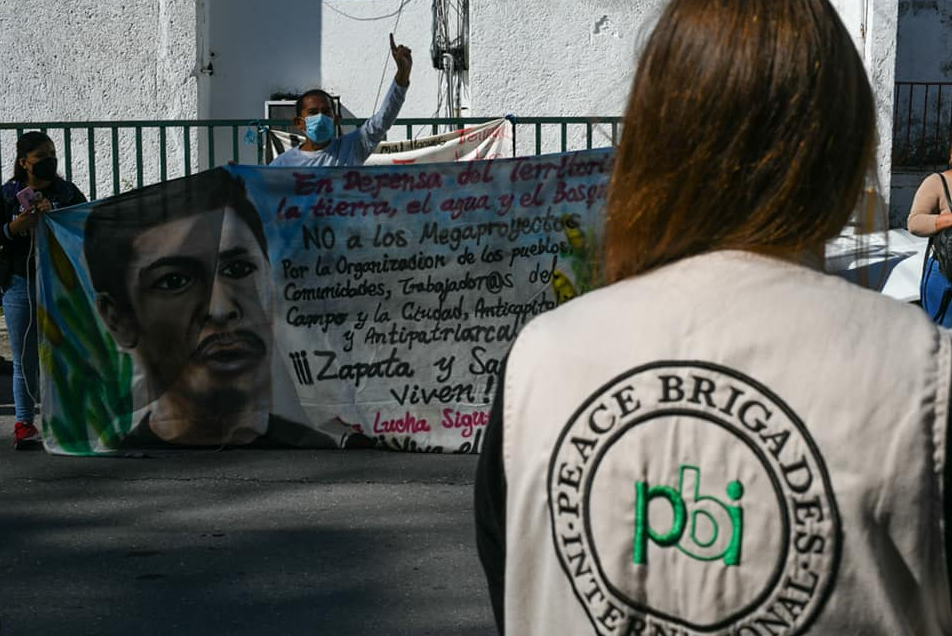 Photo: This banner has the image of Indigenous Náhuatl defender Samir Flores, a member of the Peoples’ Front, was killed in February 2019 after receiving death threats for his opposition to the PIM megaproject.

On August 23, PBI-Mexico posted: “In front of the National Water Commission (Conagua) in Cuernavaca, campesinos and campesinas from Ayala and members of the Peoples’ Front – Morelos Puebla Tlaxcala demonstrate for their right to water.”

It adds: “PBI accompanies human rights defenders in their demand for respect for water, the land and a healthy environment for their communities. We also call for the safety of water and environmental defenders to be guaranteed.”

PIM and the right to water

Latino Rebels has reported: “To cool the turbines at the plant, the adjoining aqueduct must draw 50 million liters of water daily from the Cuautla River, despite a statement by the state-owned electricity utility the Federal Electricity Commission that said that the plant would only draw from treated sewage [water].”

That article adds: “The river sustains 32 ejidos, or communal agriculture lands. Many of the ejidatarios —who collectively regulate use of increasingly scarce water supplies for irrigation through the Cuautla River Users Association (ASURCO)— warn that the project will deplete remaining supplies and return to the river contaminated water.”

Two weeks ago, Francisco García, a member of the Permanent Assembly of the Peoples of Morelos (APPM), stated: “The water has already been legally clarified corresponds to us as peasants, we have the concession in force until 2035 for strictly agricultural use of the water of the Cuautla River; we have presidential endowments, which date back to the post-revolution, for each ejido.”

El Sol de Cuernavaca reports: “In addition to the historical framework that would entitle the ejidatarios to the use of the water of the Cuautla River, there are 11 amparos calling for the suspension in favor of the peasants and against the aqueduct that will transport water from the Cuautla Wastewater Treatment Plant (PTAR) to the thermoelectric plant.”

Juan Carlos Flores Solís, a lawyer representing the Peoples’ Front, has also previously stated that the government approved Environment Impact Statement did not consider the aqueduct’s impacts on the Cuautla River nor the water rights of ASURCO.

The Peoples’ Front has posted: “We have learned that the Wastewater Treatment Plant (PTAR) water is being diverted indiscriminately and without measurement to the Huexca thermoelectric power station without our consent.”

They add: “With this document [official letter ß00.809.02-002311, issued in December 2014 by Conagua, that demonstrates our right to water], the Federal Court will have no choice but to order the suspension of water use for thermoelectric and therefore its operating tests.”

On July 30, La Jornada reported that residents of Huexca demanded that the thermoelectric plant be definitively cancelled after workers had tried for five days to start it up but only produced black smoke and a deafening noise.

PBI-Mexico began to accompany the Peoples’ Front in 2020.