The Madrid-based daily newspaper El País recently published a feature article in Spanish about the TzK’at Network of Ancestral Healers which is accompanied by the Peace Brigades International-Guatemala Project.

The article can be read in Spanish on the El País website at Mujeres indígenas que curan heridas como acto político de Resistencia.

To widen the audience able to read this article about a PBI accompanied organization, we are providing this translation into English:

Indigenous women who heal wounds as a political act of resistance

The Network of Tzk’at Healers of Guatemala works from the Mayan wisdom in alternatives to support women defenders of human rights, highly exposed to socio-political and sexual violence in their territories

Lorena Cabnal cannot say where she is. She has been accompanied by Peace Brigades International, an organization that protects human rights defenders, for more than 15 years. It comes from a very tough history. Her childhood was marked by the violence experienced as an indigenous Mayan Q’eqchi ‘girl, her family suffered forced immigration and impoverishment. She knew racism, discrimination and hunger. A whole accumulation of violence that was hard bearable and that left wounds that were very difficult to heal.

On this International Day of Women Human Rights Defenders (November 29), it is worth remembering the latest report from the Front Line Defenders organization that states that 13% of the 304 human rights defenders killed in the world in 2019 were women. But losing one’s life is only the tip of the iceberg of many other violations, threats and risks suffered by women who defend rights. Latin America continues to be the region where they are most exposed. There, being a woman and indigenous activist significantly increases these risks.

Despite all that violence, Cabnal believed that, with the awakening of conscience, healing was worthwhile. With this idea, she co-founded the TzK’at Network of Ancestral Healers, heirs of Mayan wisdom, six years ago. It did so in a context of political risk for Mayan and Xinca women who came from experiences of territorial defense, who opposed mining licenses, logging of forests, the presence of hydroelectric plants or cement plants. “There comes a time in the history of struggle and resistance, which increases the situation of vulnerability of indigenous women defenders. We have to leave our territories due to risks, attacks and threats,” Cabnal recalls through a video call, who also had to leave her territory, faced with a large cement factory owned by one of Guatemala’s oligarchic families.

Indigenous communities have always denounced that the extractivist model entails social conflict and impoverishment, but little is known about the deep pain they feel and that it goes far beyond environmental impacts. The Healers network has experienced it first hand. “When a megaproject is implanted in a territory, it is as if they penetrate your body in a sexual violation. This is how we feel,” says Chaim, a member of the network. “If a river is occupied by a project, we can no longer vitalize with it, we cannot bathe or drink from its polluted waters. In addition, we run the risk of being sexually abused by the company’s workers.” Chaim believes that the bodies of communities do not matter: companies go beyond their physical, emotional, sexual and spiritual integrity.

The Network of Healers understands healing as a political act of resistance and permanence in the territory. And they do not conceive, they say, that the struggle of their peoples against the dispossession of their territories is separated from the struggle against sexist violence that abounds in them. “The threats also come because there is a whole struggle against indigenous machismo. Here, being a woman would answer against all forms of violence against girls and women in the same spaces of resistance puts us at a political disadvantage,” says Cabnal. The defender describes these dynamics in the framework of a history of political-territorial displacement in a neoliberal context.

It is through what they call territorial community feminism that the Network of Healers challenges the ancestral macho patriarchy. And it conceives the recovery of the territory-body as an inseparable step in the defense of the territory-land, which is damaged by an extractivist development model promoted by transnational companies and by the Guatemalan State itself. All of them responsible for undermining the lives and bodies of women. “We cannot defend the land alone if we do not defend our bodies. A megaproject implies ending life in a comprehensive way. For this reason, our healing must also be comprehensive,” says Chaim.

“We call it territorial because we are in the territory, where there is another vision, another way of living different from other places,” highlights Telma Pérez, also a member of the Network. The defender remembers how she rebelled for the first time at age nine, when his dad yelled at his mom. From there, she defines herself as a territorial community feminist, speaking in assemblies and denouncing the naturalization of systematic violence against girls and women. “Community feminism is to bring awareness of the autonomy of women and to be able to see that we have been commercialized.”

In Guatemala, the risk for women defenders is always very latent: “We women go out to the market and we don’t know if we are going to return alive. But there is also the risk towards those of us who are in a community organization, within a town where machismo also exists.” Chaim defines it as a triple dimension of criminalization: woman, defender of human rights and part of a patriarchal and macho environment.

The women who attend and participate in the Network of Healers are summoned in this way from the violence experienced in their territories, but also from their own personal stories. It is a process that begins by listening to the feelings of women, to continue with the plant baths that unblock the toxins generated by emotions. During the ceremony, the healers call the ancestors, interacting with the assistants to find out why they are there and who has the most specific needs. “They will excuse me for the word, but among the screwed up, there are still others more screwed up, who are given a more personal accompaniment within the collective,” says one of them. For Pérez it is normal that one day at three in the morning his phone is overloaded with calls and messages from colleagues who need to be accompanied.

This healing process starts from the worldview of the original women. For Chaim it is important to emphasize that it is not a moment of well-being and relaxation, but rather an awakening of consciousness through a viable and sustainable process that strengthens emotionally and adapts to the knowledge and beliefs of the territory. “We do not believe that there is an enlightened person who comes to awaken the conscience or that we as such are going to do it. We start from the political duels and mourning of the murdered, disappeared or tortured comrades. And we observe how the dynamics of the struggle for the defense of land and territory affect our bodies,” she says. And it is that, for them, the fight has been, and continues to be, the only survival option they have had. “We don’t want any more political duels. We don’t want to have too many photos of Berta Cáceres on our wall.”

Currently, the Network of Healers is made up of seven active members who are in different parts of the territory. None of them can make their whereabouts visible because of the risk it entails, and some of them had to go into exile as political refugees. In the network there are sobadoras, bone women, ancestral midwives or yerberas and their main slogan is based on a relationship of reciprocity for life: “You are me and I am you.”

They do not feel identified with the label “organization”. They are a network of women who share knowledge. “That makes us know how to agree and address the processes for the physical, emotional, spiritual, territorial and political recovery of indigenous women who are experiencing the risks of attacks and threats. When we deal with cases of sexual violence, it is done by women who have experienced sexual violence because we know in which code we are talking,” explains Cabnal.

The association is understood as a mutual support, physical and spiritual, integrated in a healing process. An act where the body is “literally” put on, and all the feelings that cross the corporeality of what they have experienced and what they feel at that moment, they explain.

Healing in times of pandemic

Healing is a face-to-face job that has had to adapt to the times of covid-19, where most of the healing processes are now carried out through video calls, using strong security systems to protect its location.

“We have had the cunning and the possibility of being with organizations to be able to cover minimal communication expenses and make virtual arrangements and thus embrace each other from a distance,” Cabnal explains. Opening healing in a virtual way has also opened the possibility of being able to be in other territories of other countries and continents, she says. And she concludes: “We have taken advantage of the effects of the pandemic to awaken the healing memory of the peoples and thus strengthen the autochthonous forms of Mayan medicine and those communities with different knowledge of healing.” 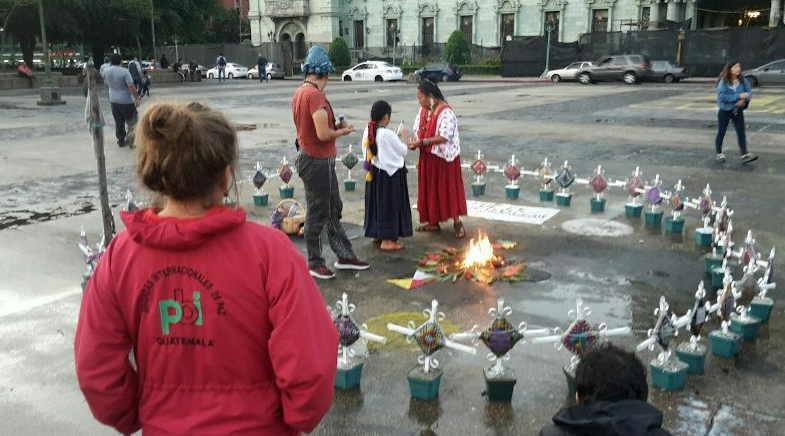 Photo: Democracy Now! On January 19, Democracy Now! reported on Honduran migrants experiencing and military and police violence in Guatemala then on the separation of migrant families in Mexico due to the Trump administration’s immigration Read more…

On January 17, the Peace Brigades International-Colombia Project posted on Instagram: “Last week, volunteer brigade members from our field team in Urabá accompanied the Peace Community of San José de Apartadó on a day of Read more…