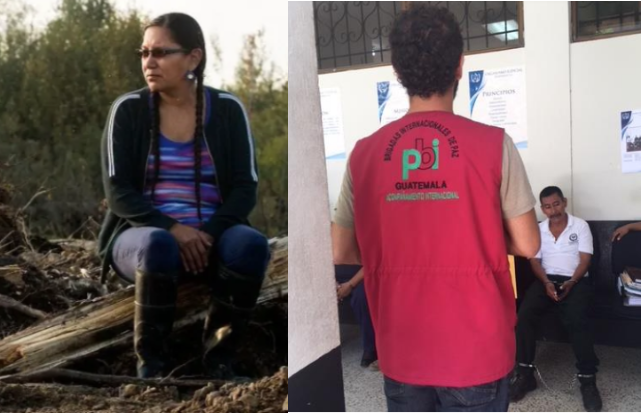 Peace Brigades International-Canada notes similar patterns of the criminalization of Indigenous peoples in Guatemala and the Northern Territories of Turtle Island/Abya Yala (Canada) and recently on Treaty 6 lands in Saskatchewan.

CBC News has reported: “Idle No More co-founder Sylvia McAdam and her brother Kurtis McAdam will go to trial in a Saskatchewan courtroom on [March 20, 2019] for building a cabin on ancestral territory they say was intended to be set aside as reserve land.”

The article continues: “They were issued a warning by [a provincial conservation officer] in 2017 for ‘unlawfully occupying park land’.”

“Sylvia McAdam said going to court is a culmination of failed meetings between her family and the province over the years over whose territory it is.” McAdam says: “The meetings fell apart because they didn’t agree with us when we told them that these are our lands and they have always been our lands.”

That article also noted: “She said she hopes the case brings attention to the Truth and Reconciliation Commission‘s Call to Action 45, which is to ‘repudiate concepts used to justify European sovereignty over Indigenous lands and peoples such as the Doctrine of Discovery and Terra Nullius.’”

As noted in this Conversation article, “At trial, the responsible conservation officer testified that treaty obligations were not considered when the charge was laid.”

It also highlights: “Shortly before the case was dismissed, McAdam’s aunt Rose Morin disclosed to her that conservation officers had established checkpoints surrounding Big River First Nation. They wanted to search vehicles for an alleged hunting violation.”

The article comments: “The move was seen as a reminder to the community that Canada’s laws were stacked against them.”

The criminalization of Indigenous peoples on their own lands is a pattern that Peace Brigades International has also seen in Guatemala.

Victoria Tauli-Corpuz, the past United Nations special rapporteur on the rights of indigenous peoples, has stated: “The crime of aggravated usurpation is commonly brought against indigenous land rights defenders.”

She explains: “Disregard of indigenous rights of traditional lands ownership breeds tensions, subsequent violence and criminalization, as indigenous peoples become trespassers or illegal occupants of their own lands, subject to criminal charges such as ‘usurpation’ or illegal occupation, and liable to forced evictions and removal from the lands they rely upon for their livelihoods, social and cultural cohesion and spiritual traditions.”

One example of this took place around the time of Sylvia’s trial in Saskatchewan. PBI accompanied the trial of Eduardo Bin Poou, a Mayan Q’eqchi defender, who was charged with trespassing on a state-designated protected area.

Eduardo had visited this ‘protected area’ inside an Indigenous community for a meeting about the environmental harms being done by the Fenix nickel mine that was first developed by Toronto-based Inco and is now operated by the Russian-owned Solway Group.

While Eduardo was eventually acquitted of that charge, he spent more than two years in jail as a result of the criminalization process against him.

PBI-Canada agrees with the PBI-Guatemala statement: “Indigenous leaders continue to be criminalized. We reaffirm that defending rights is not a crime.”