Published by Brent Patterson on January 24, 2020 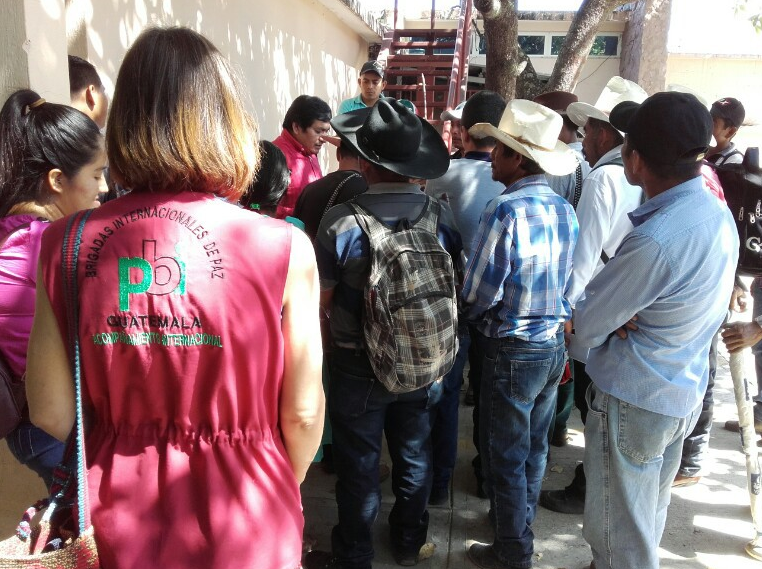 On January 24, the Peace Brigades International-Guatemala Project posted, “The communities of Jocotán, Camotán and San Juan Ermita claim the care of the forest that joins its three municipalities. This forest is undergoing immoderated logging by a mine installed in the territory.”

PBI-Guatemala adds, “Yesterday we accompanied more than 20 indigenous authorities, members of Nuevo Dia, following the dialogue table, initiated last month, on this conflict with the presence of the National Dialogue System, the Chiquimula Governorate and the PDH [the Office of the Human Rights Prosecutor/Ombudsperson].”

On December 4, 2019, PBI-Guatemala posted, “Yesterday we visited the peaceful assembly called by Nuevo Dia on the Jupilingo Bridge to demand the immediate interruption of the excessive felling of the Lelá Obraje forest and the implementation of megaprojects that threaten Mother Earth and human rights.”

The Guardian has reported, “Forests mitigate climate change, but Guatemala has lost half its woodlands in the past 40 years – and deforestation rates are rising, in turn causing floods, landslides and erosion of farmland.”

PBI-Guatemala has previously explained, “CCCND work in the four Ch’orti’ municipalities in the east of the country – Camotán, Jocotán, Olopa and La Unión – in the department of Chiquimula.”

“The work of CCCDN revolves around the defence of the territory and its main concerns and actions focus on the impacts of projects and megaprojects on the environment and local economies.”

“Several of its members have received threats, including death threats, suffered intimidation and attacks due to their work in the communities.”

The Front Line Defenders Global Analysis 2019 report released this month noted, “In Guatemala, members of the Nuevo Dia Chorti Indigenous Association (CCCND) were subjected to numerous attacks, intimidation and attempts to divide the community, when they were portrayed as taking advantage of their leadership roles for personal gain.”

That report adds, “CCCND provides support to Maya Chorti communities whose way of life is at risk due to hydroelectric and mining projects being implemented on their territories.”

The Chʼortiʼ people are one of the indigenous Maya peoples, who primarily reside in communities and towns situated in southeastern Guatemala, northwestern Honduras, and northern El Salvador.

PBI-Guatemala has accompanied Nuevo Dia since 2009.