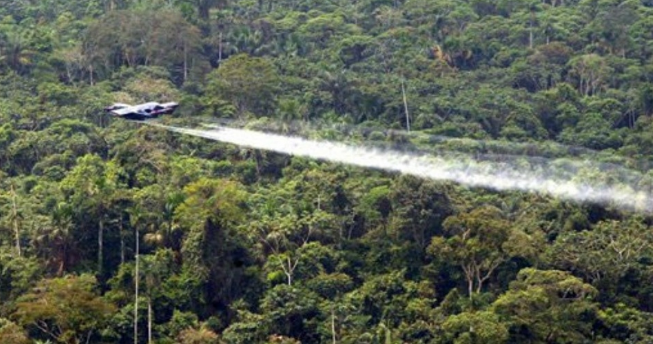 On January 21, Vice reported, “The Colombian government has published a proposed law that will allow it to resume a controversial program of aerial fumigation of coca crops using glyphosate, a weed-killer thought to cause cancer in people exposed to it regularly and in high doses.”

“The plans are in the final stage of their passage to law, and spraying is expected to begin ‘in the second half of this year’, said Ricardo Vargas, an expert in crop fumigation and coca at National University of Colombia.”

The article adds, “The proposals by the Colombian president, Ivan Duque – after a five year hiatus in coca spraying – have been criticized by local government officials, environmentalists, drug policy experts and rural communities living under the proposed toxic flight paths.”

The Constitutional Court has previously ruled that any decision to resume the use of glyphosate in aerial spraying must be based on “objective and conclusive evidence demonstrating no harm to health and the environment.”

Colombia Reports comments, “The [government’s] decree ignored the court’s conditions that the government must prioritize the crop substitution program that is part of an ongoing peace process and the inclusion of an ethnic minority representative in the CNE [National Narcotics Council]. The government plans as they stand do include the participation of affected rural communities as demanded by the court.”

The Guardian has previously reported, “The [2016 peace] deal included provisions to help peasants substitute coca crops for legal alternatives such as coffee and cacao.”

That voluntary substitution of illegal crops held the promise of state assistance for farmers that included cash incentives, technical support, new roads and bridges to get their products to market, teachers for their children, and legal title to land they hold informally.

But the Washington Post noted in July 2019, “That pledge remains unfulfilled — and coca has proliferated.”

Deutsche-Welle highlights, “By not giving farmers the help they need to make the transition, Isabel Pereira [drug policy adviser for the Colombia-based research and advocacy organization Dejusticia] believes the Duque administration is actively weakening the 2016 deal and threatening the possibility of a lasting peace.”

The impact on social leaders

Ricardo Vargas says, “Many social leaders, some of whom have been for promoting the substitution of coca, have been threatened or killed. The government is failing to offer physical security for them. Fumigations disrupt the poor stability of people living in these territories, pollute water, affect people’s health, generate forced displacements and with them schools, or sources of income for parents, causing social upheaval. It affects forest and woodland, creating conflict and uncertainty for all communities.”

Front Line Defenders recently noted that 106 human rights defenders were killed in Colombia in 2019. Onda Opita has reported, “The office of the high commissioner Michelle Bachelet verifies another 13 possible cases of murders of activists last year that, if confirmed, could increase the total number of cases to 120.”

That article adds, “In the first 14 days of 2020 another 10 have died according to the UN. However, social organizations report that there are 18 cases.”

During a November 2019 speaking tour in Canada, human rights defenders with the legal collective CCALCP and the human rights organization CREDHOS highlighted their concerns about the resumption of the aerial fumigation of coca crops using glyphosate.

Emelia Fournier tweeted this video of Indigenous land defenders chanting “Trudeau is a colonizer” and interrupting Prime Minister Justin Trudeau’s address at the opening of the COP15 biodiversity summit in Montreal. The banner that they Read more…

On December 6, PBI-Colombia tweeted: “We accompany @Credhos_Paz in the return of Raul Amaya, leader of the Association of Victims #MagdalenaMedio forcibly displaced from #PuertoBerrío due to serious attacks. @Credhos_Paz recently accredited as a collective Read more…