PBI-Colombia remembers with Adriana Quintero the disappearance of her father

On December 4, the Peace Brigades International-Colombia Project posted, “Ángel Quintero was an active member of the Association of Family Members of the Detained and Disappeared (ASFADDES) – Medellín section.”

PBI-Colombia adds, “His daughter, Adriana Quintero, who has lived in exile for 14 years, tells us that story that marked her family changed forever, just like us.”

On Instagram, PBI-Colombia notes, “Adriana visited us in August in the framework of events organized by the Truth Commission and the People Search Unit given by Disappeared. We sit with her and remember that tragedy that marked us all and all forever.”

Adriana tells her story in this 16-minute video (in Spanish).

There is also this 2-minute video (with English subtitles) with Gloria Gómez of ASFADDES talking about the context when PBI-Colombia opened its office in Medellín in 1999. She says, “We remember PBI with a lot of affection, it is still in the heart of ASFADDES.”

PBI-Colombia has explained, “ASFADDES was the first organization in Colombia to unite family members of victims of forced disappearance, to make this crime visible and to call for a response and was one of the organizations that requested PBI’s presence in Colombia.”

“We accompanied the organisation’s national office in Bogotá and its regional offices in Barrancabermeja and Bucaramanga. In light of the situation of violence and repression facing the ASFADDES Medellín office, they also asked for PBI accompaniment.”

And they note, “PBI maintained a permanent presence in Medellín until 2011, a deeply important part of our history in the country.” 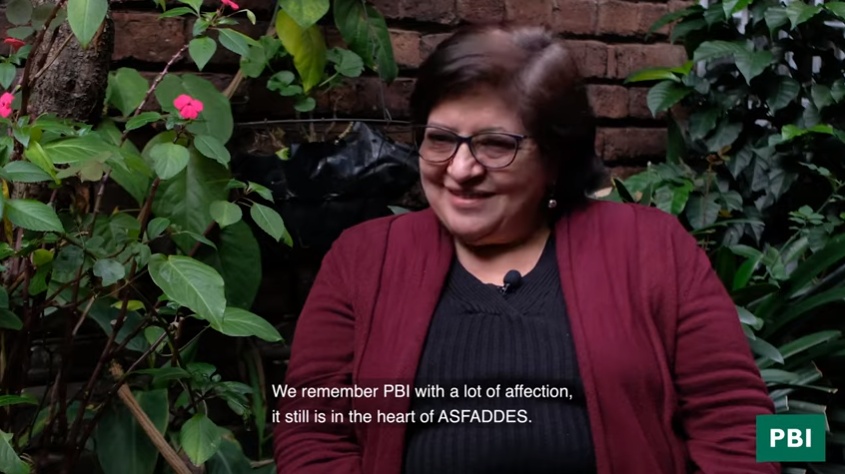