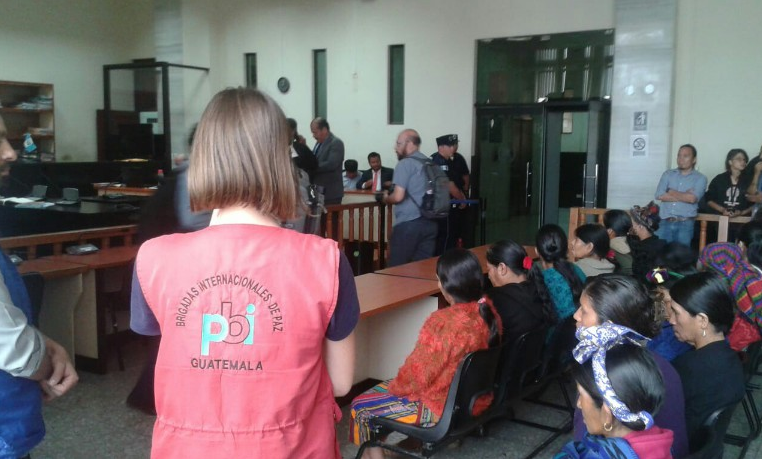 On October 29, the Peace Brigades International-Guatemala Project posted, “On Monday we observed the hearing of the first statement of the Genocide Ixil case.”

It also notes, “The hearing was postponed for today, so Lucas García can be defended by the lawyer of his choice.”

Plaza Publica has reported, “The defendants are three military elders, they are accused of having devised a campaign to exterminate the indigenous population during the presidency of Fernando Romeo Lucas García.”

That article adds, “The investigation prepared by the Human Rights Prosecutor’s Office together with AJR [the Association for Justice and Reconciliation], the complainant representing the victims, puts the focus on the three years and nine months that Fernando Romeo Lucas García ruled, from July 1978 to March 1982…”

“During that period, the researchers say, 31 massacres were committed, there were 1421 victims, 23 villages razed, 97 selective deaths, 117 forced displacement deaths, 26 cases of sexual violence and 53 forced disappearances.”

Last week, CMI-Guatemala commented, “The arrest of Noguera Argueta occurs in a context of setback in the fight against impunity and corruption, led by retired military, economic elites, and conservative politicians.”

That article adds, “Last month they managed to close the International Commission Against Impunity in Guatemala (CICIG) after 12 years of work dismantling structures of corruption and abuse of power.”

“In turn, they have promoted a proposal for an amnesty law that would end all investigation and prosecution of cases of serious human rights violations, and immediately release all those who have been convicted or are in prison awaiting trial in these cases.”

On April 21, the Oaxacan Collective in Defence of the Territories posted an update about the Vancouver-based Fortuna Silver Inc. San José mine in Mexico. Their article highlights that the Non-Mining Front for a Future Read more…

Our next webinar will take place on Thursday April 29 at 3:30 pm EDT and as with our previous webinars it will have simultaneous translation in English and Spanish. You can register for it here. Read more…

What does the Escazu Agreement mean for environmental defenders opposing fracking in Colombia?