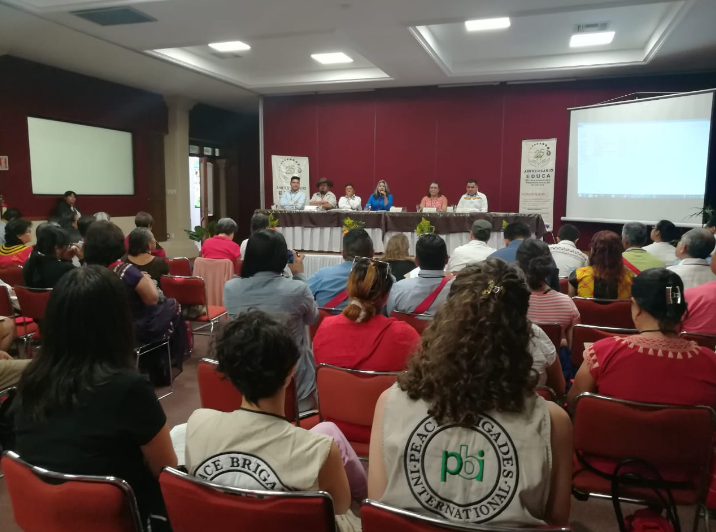 On August 30, the Peace Brigades International-Mexico Project tweeted, “PBI accompanied EDUCA at the colloquium ‘Challenges of the social and popular movement in the times of transformations in Mexico 1994-2019’.”

PBI-Mexico notes that it has accompanied Services for an Alternative Education (EDUCA) since May 2013 “because of their vulnerable situation and the high-threat situations faced by the communities where they work.”

In this reflection on their 25th anniversary, EDUCA notes, “1994 was the year of the uprising. That year we rose up. With the Zapatista rebellion we saw not only the awakening of consciousness of millions of people but also a hope for change in Mexico. For a group of young people who had been doing social work in ecclesial spaces, this uprising also meant organizing and taking alternatives.”

As highlighted on the PBI-Mexico website, “Part of EDUCA’s work includes accompanying “various community processes which defend territory from energy-based megaprojects, such as the silver mine in San José del Progreso, the gold mine in Magdalena Teitipac, and the wind farms on the Isthmus of Tehuántepec.” EDUCA also supports community opposition to the construction of the Paso de la Reina hydroelectric dam.

In November 2018, PBI-Canada hosted public forums with Neftalí Reyes Méndez from EDUCA and Indigenous leader Salvador Martínez Arellanes where they highlighted concerns being expressed by the residents of Santa Catarina Minas about a concession granted near their community to Vancouver-based Fortuna Silver Mines.

They noted that the residents are aware of the violence Fortuna’s operations has brought to the nearby community of San José del Progreso, including the deaths of Bernardo Méndez Vásquez and Bernardo Vasquez Sánchez.

EDUCA comments about the overall situation in Mexico: “The ‘accumulation by dispossession’ has reached a climax, with territories granted to mining, wind power and real estate companies, or for the development of hydraulic projects, the construction of highways and the large-scale production of genetically modified corn.”

For more on their recent work – including supporting communities opposing to a newly announced proposed hydroelectric dam on Río Verde – click here.

PBI-Canada extends to EDUCA our best wishes for its 25th anniversary!