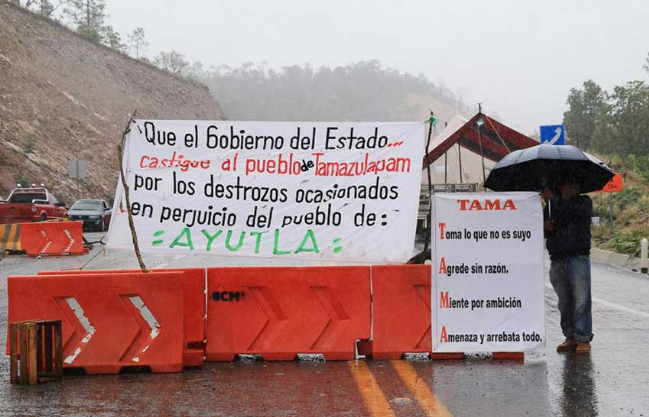 A highway blockade by Ayutla residents protests the water situation. The banner reads: “That the state government punishes the people of Tamazulápam for the damage caused to the detriment of the people of Ayutla.” Photo by Mexico News Daily.

On August 5, civil society organizations announced a ‘Civil Observation Mission’ with the objective of documenting human rights violations, with an emphasis on the right to water, and make recommendations to the state and federal authorities.

El Universal reports this activity is known to international bodies including Peace Brigades International, the Office of the High Commissioner for Human Rights, and the Federal Mechanism for the Protection of Human Rights Defenders and Journalists.

Mexico News Daily has explained that two years ago “authorities in San Pedro y San Pablo Ayutla, a municipality in the state’s Mixe region about 100 kilometers southeast of Oaxaca city, connected to the water supply of the neighboring municipality of Tamazulápam del Espíritu Santo when their own supply ran dry.”

That article adds, “On May 17, 2017, a violent clash broke out between the two opposing groups, with both guns and sticks used in an ugly confrontation. …Ever since, water supply to Ayutla has been cut off, forcing residents to find an alternative source or look to the sky for relief.”

Proceso further explains, “The armed group from Tamazulapam took the spring, cut off the supply of drinking water and destroyed the hydraulic infrastructure of the community (two water tanks and pipes that connected 70% of the indigenous population).”

“That situation was denounced as a crime against humanity. However, state and federal officials, with knowledge of the risks and facts, did nothing to avoid major problems.”

And it notes, “The case of water dispossession arrived at the United Nations on April 25. On that day, the Special Rapporteur on the Rights of Indigenous Peoples, Victoria Tauli-Corpuz, received the file related to the collective violation of the human right of access to water committed to the entire Ayutla community since June 5, 2017.”

Last month, Educa Oaxaca tweeted, “Indigenous Mixe community of Ayutla has suffered for 2 years without water, due to land grabs by an armed group from neighboring Tamazulápam. Threats to Ayutla continue, yet the state government asks Ayutla to cede more territory.”

That tweet highlighted this article which says, “The municipal authority of San Pedro y San Pablo Ayutla denounced that the government of Oaxaca intends to strip them again of more territory to give it to Tamazulápam under the pretext of building infrastructure to provide them with drinking water.”

As now highlighted on the Educa Oaxca website, “Given the evidence of serious human rights violations and the unfulfilled promise by the Oaxaca government to reconnect the water to Ayutla, there is a tense situation between the two communities and the risk of a new escalation of violence.”

It adds, “The Resolution calls upon States and international organisations to provide financial resources, help capacity-building and technology transfer to help countries, in particular developing countries, to provide safe, clean, accessible and affordable drinking water and sanitation for all.”

Agencia EFE reports, “An amendment establishing access to water as a human right was added to Mexico’s constitution in 2012, and Congress was supposed to draft and approve within 365 a General Water Law to make the measure effective, but the legislation has yet to materialize.”

A study released by the National Autonomous University of Mexico’s Social Research Institute this past March 22 (World Water Day) found that between 12.5 million and 15 million Mexicans are without a secure, reliable supply of drinking water.

Following a May 2017 visit to Mexico, the UN Special Rapporteur on the human rights to safe water and sanitation Léo Heller stated, “The reality of access to water for poor communities in dispersed rural or peripheral urban areas and indigenous peoples is sporadic supply and unreliable water quality, leaving many people dependent on costly or unsafe water sources.”

[…] – PBI-Mexico and the Civil Observation Mission on the right to water for the Indigenous community of A…; […]

[…] grabs – PBI-Mexico accompanies Educa Oaxaca which has highlighted that the Indigenous Mixe community of Ayutla has suffered without water, due […]